I'm typing this on a MNT Reform version 2, motherboard revision 2. Almost exactly one year has passed since we finished the previous big incarnation of Reform (which we call version 1). Back then, it was powered by i.MX6 and we needed at least a full day to assemble one. The new Reform has a much simpler architecture, more power, a bigger 1080p eDP display, a keyboard with a satisfying writing experience, and it can be used to get real work done. It can be assembled in half an hour (given populated PCBs). 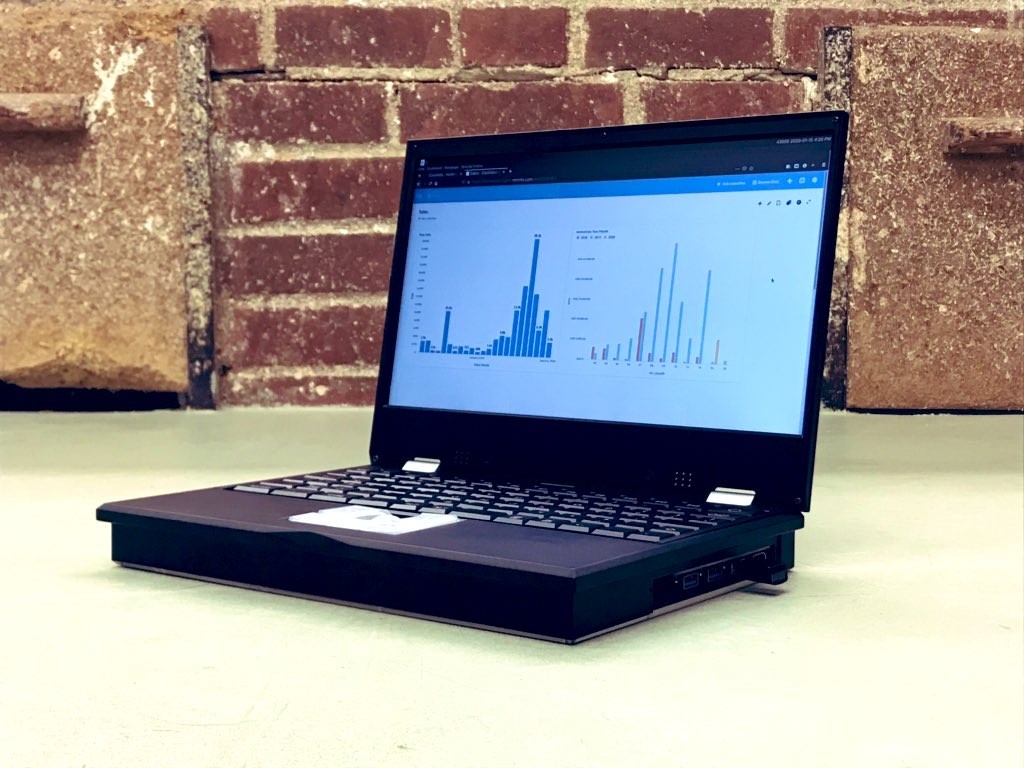 In this article I want to give a quick walkthrough on what we changed to get to this version that is very close to the final thing you'll be able to acquire from the Crowd Supply campaign.

The CPU, GPU and hardware implementations of standard interfaces like USB 3.0, PCIe, and MIPI DSI are all located in the NXP i.MX8M, which is called a System-on-Chip (SoC). This SoC supports LPDDR4 memory, which in our case has 4GB capacity. The SoM features an Atheros Ethernet MAC chip (AR8035). Both SoC and memory chips sit on a System-on-Module (SoM) that we source from Boundary Devices, a US company that specializes on i.MX reference designs. We selected their "Nitrogen8M SOM" module for Reform because it is the only available module for which you can download the complete schematics and understand what every component does. The SoM plugs into the Reform motherboard's central 200 pin SO-DIMM connector. This means that anyone will be able to design a replacement SoM to power Reform with a completely different CPU or an FPGA, for example.

We developed a custom aluminum heatsink for the i.MX8M that allows Reform to run fully passive cooled, eliminating the need for a fan. 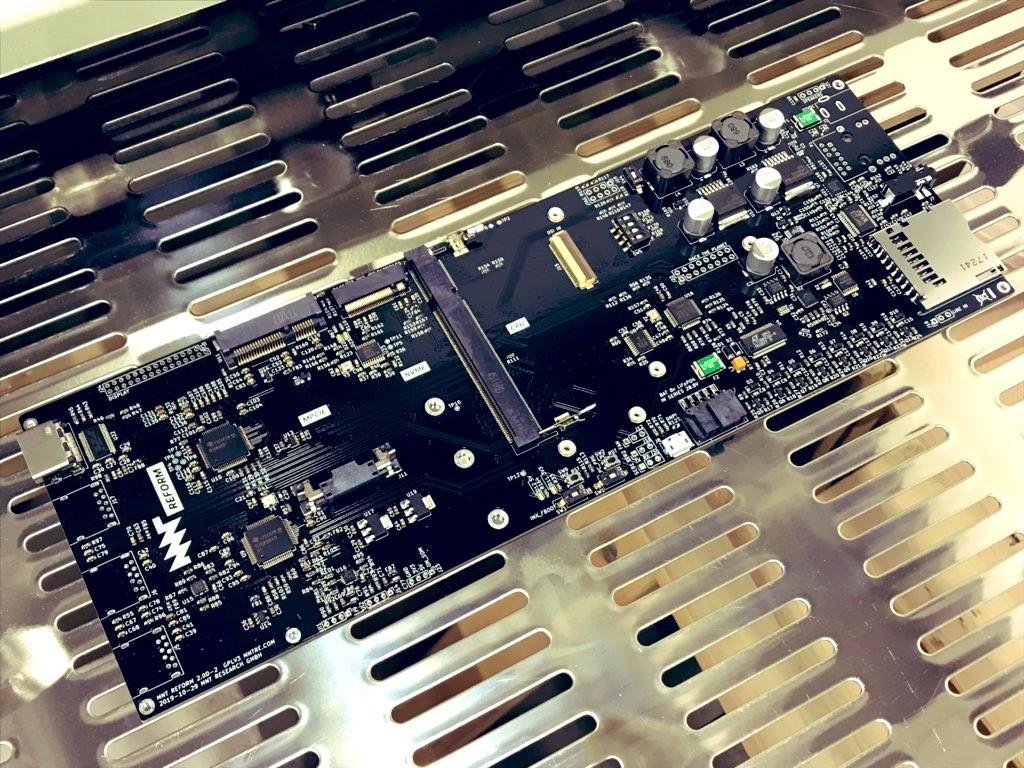 The motherboard spans the complete width of the device (around 27cm) and ends with external ports on both sides. It has the following features:

The Reform motherboard is open source hardware designed with the free KiCAD EDA. You can find the sources here:

The final port arrangement features on the left side:

On the right side: 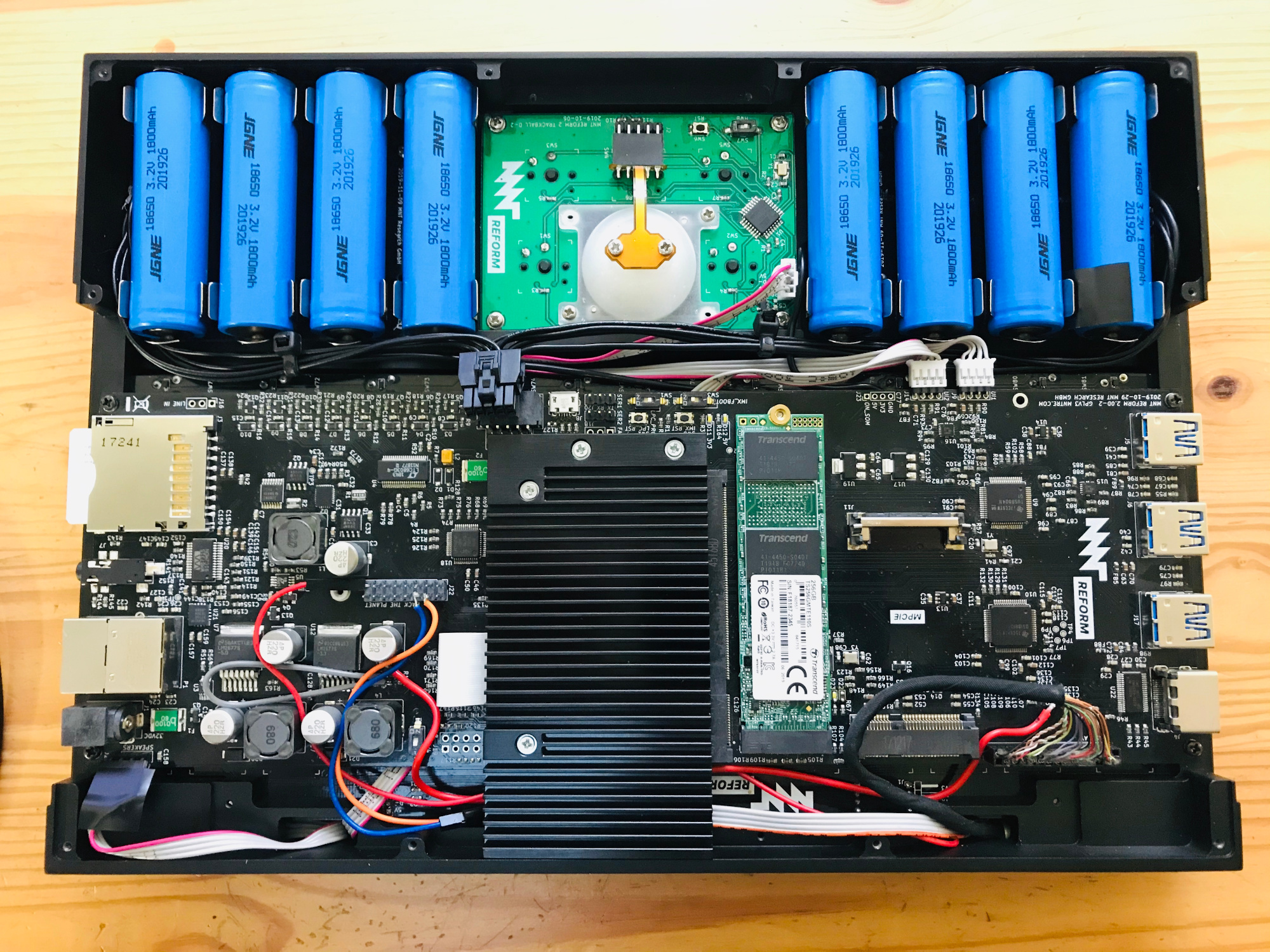 When not connected to a wall adapter, Reform is powered by 8x 18650 LiFePO4 battery cells. Each has a nominal voltage of 3.2V, and all cells are linked in series, which means an operating voltage of 28.8V. This arrangement has the upside that we can monitor and balance each cell individually. You don't have to factory-match cells like you would have to in a parallel arrangement. You can buy replacement cells for Reform for around 2.50 EUR. The LiFePO4 chemistry trades some energy density for many advantages:

We have teamed up with Fully Automated Technologies who help us optimize Reform's Power System for the final motherboard revision. Our goals are to be able to charge from a wide range of voltage inputs and to squeeze out more efficiency from buck voltage conversion.

The black anodized and sand blasted aluminum case, designed by industrial designer Ana Dantas, is one of the aspects of Reform we're the most proud of. We made one more iteration to improve haptics and assembly ergonomics/speed and ended up with 5 CNC milled parts:

For easy (dis)assembly, Reform uses only M2 screws with Phillips head everwhere (with one exception: M4 on the hinges). 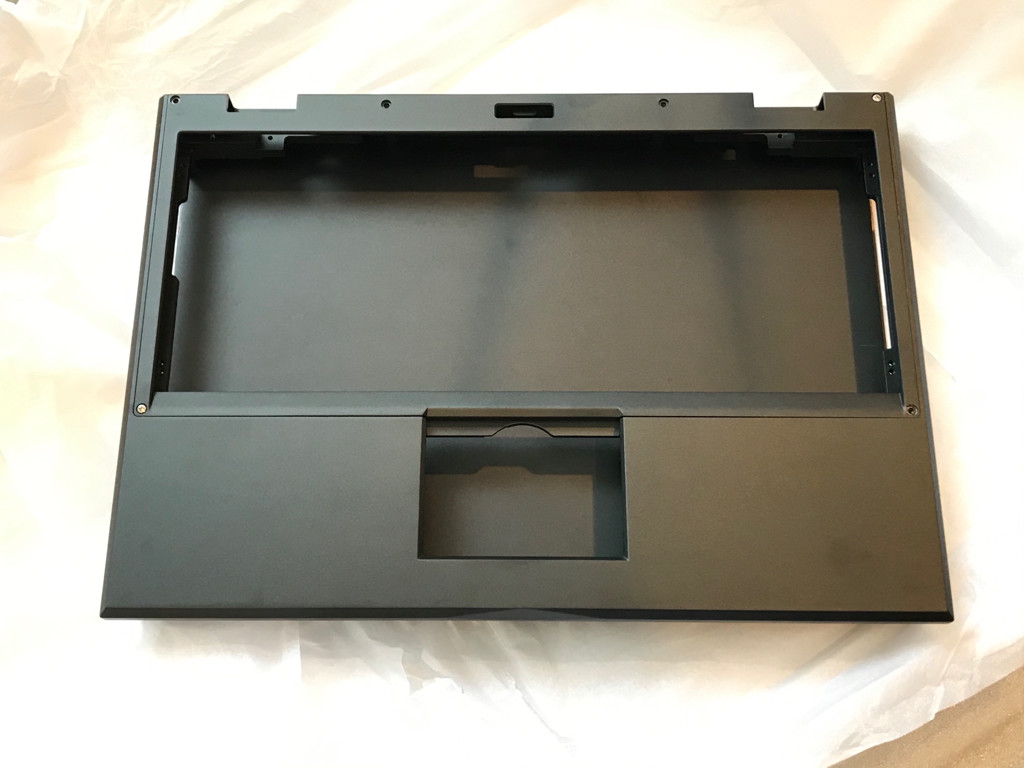 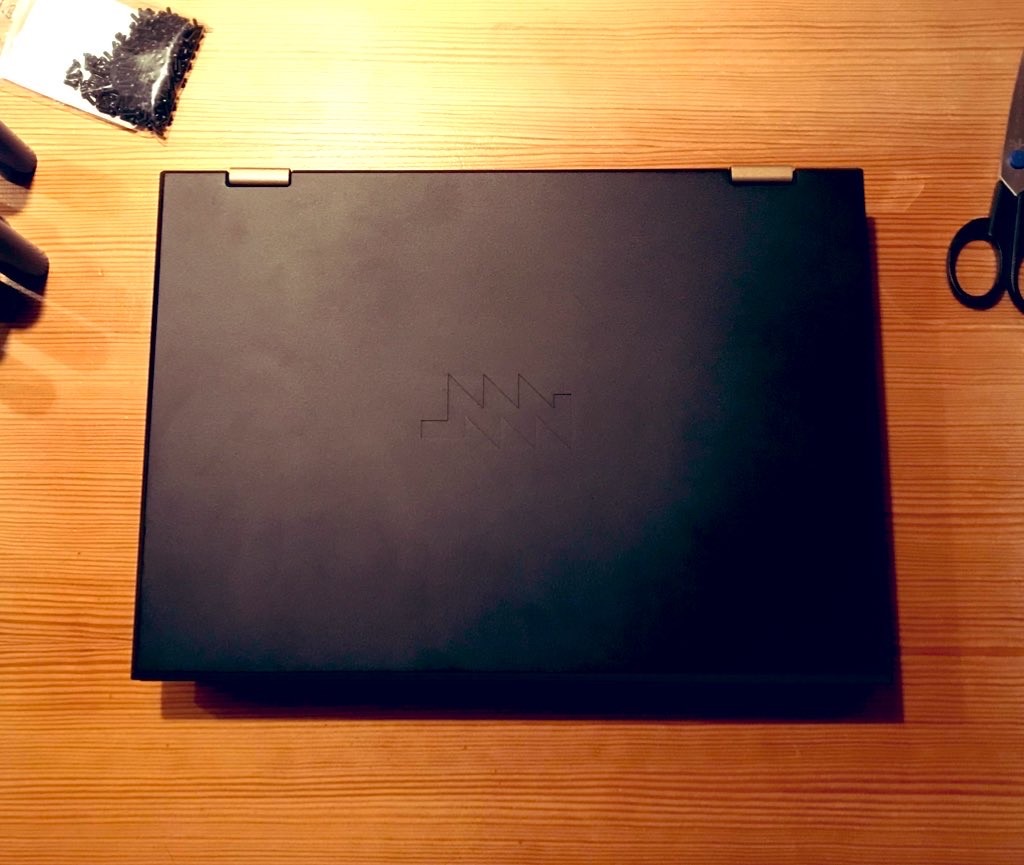 The hinges for Reform are made by Smooth Group, model number SMS-ZZ-219. These are the same that we used in Reform version 1. They are very robust and allow the Reform screen to be opened to an angle of over 180 degrees. 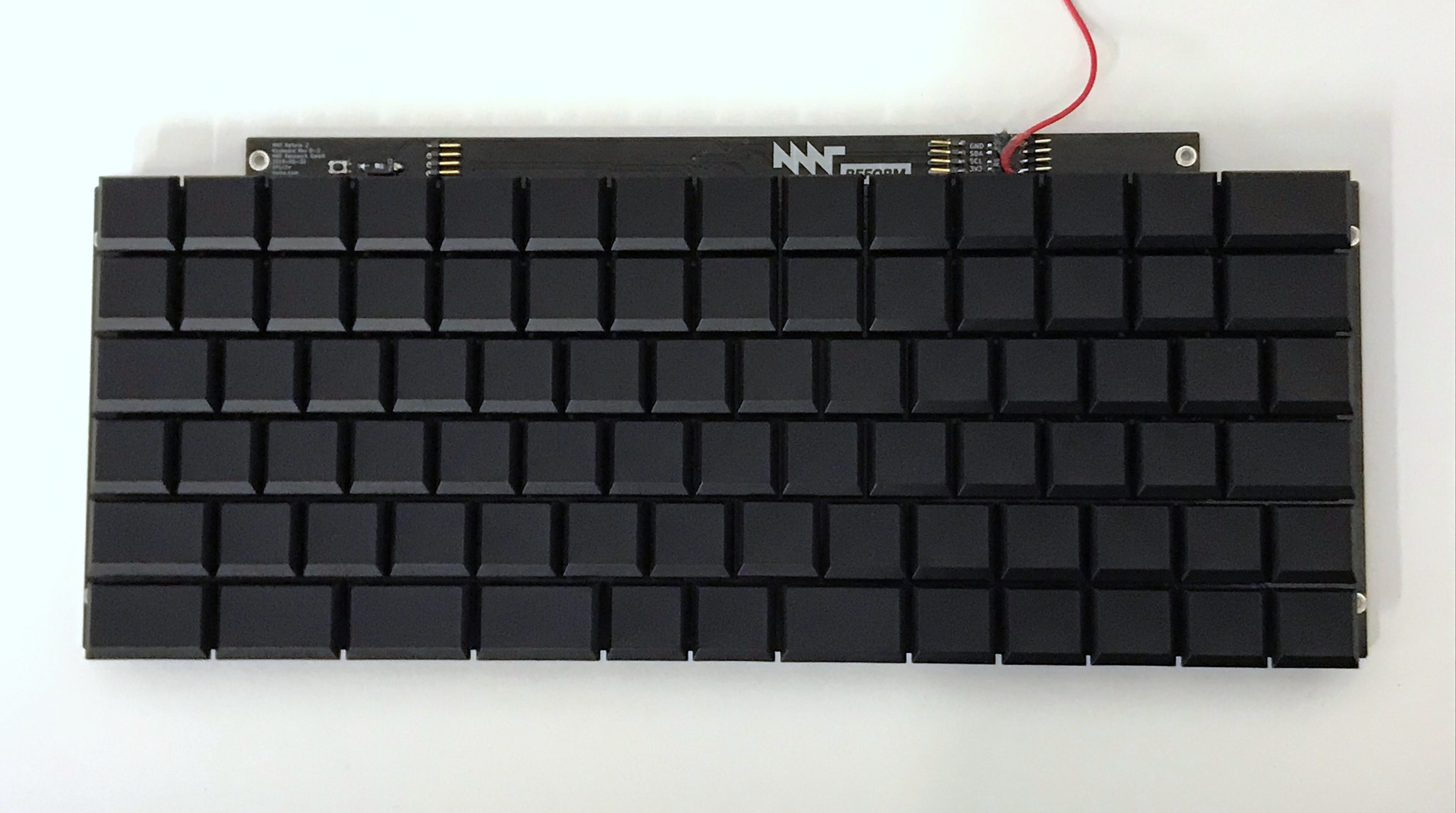 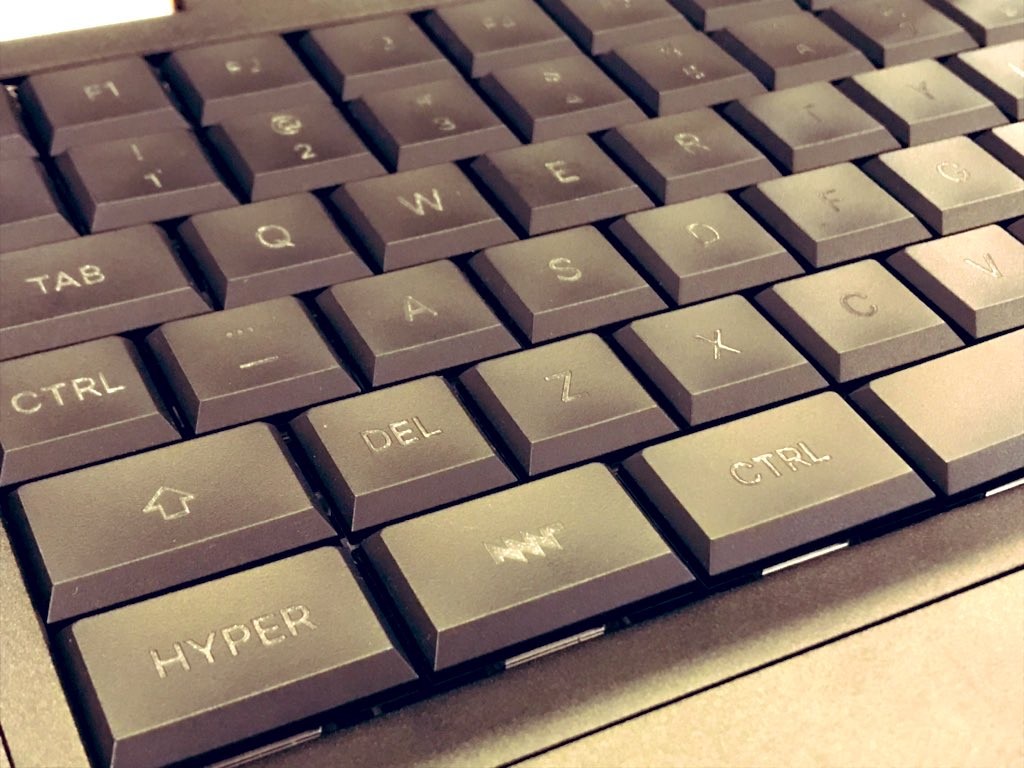 We iterated on the keyboard a few times to arrive at a layout that is a successful tradeoff between ergonomics and cost: 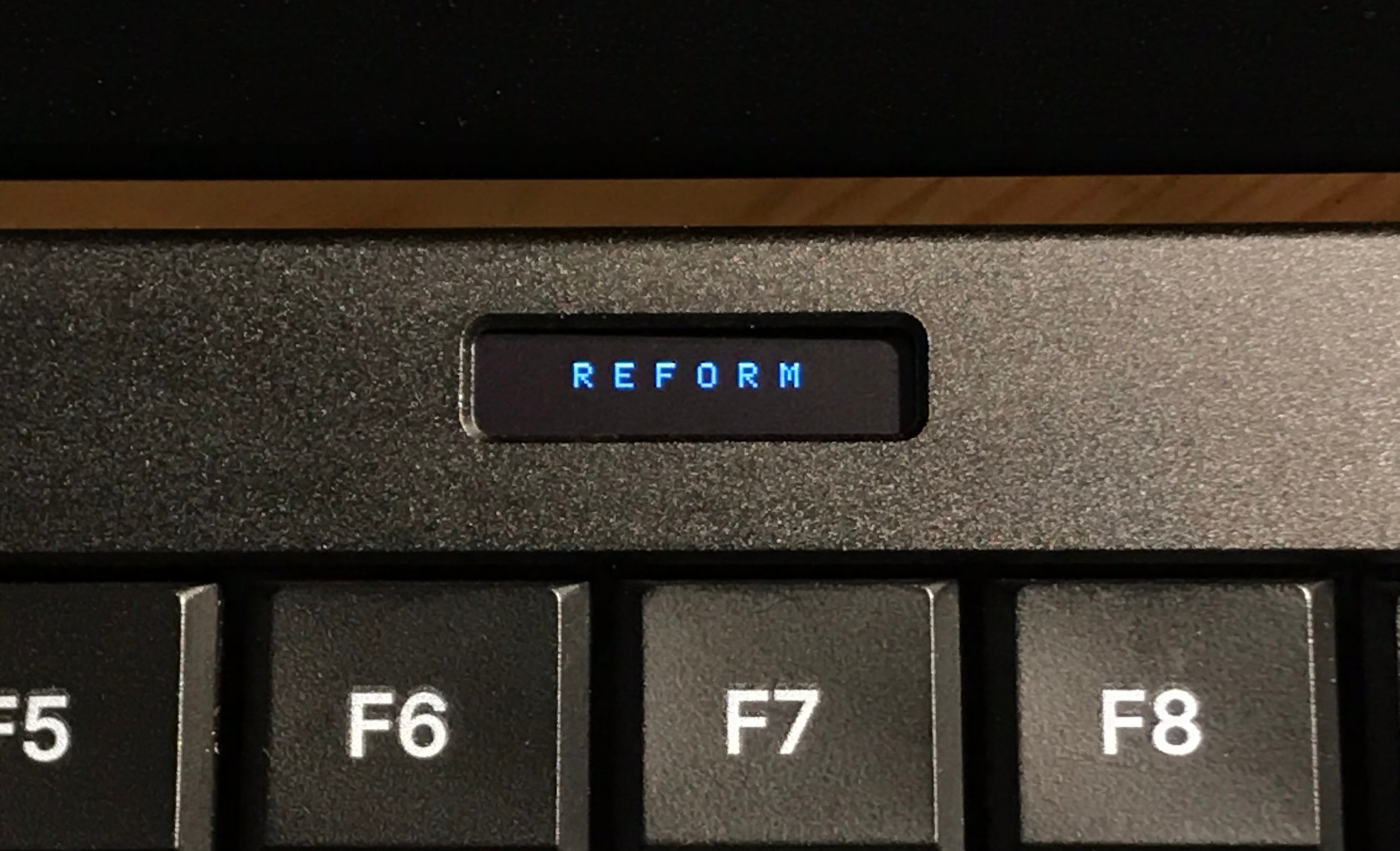 The keyboard not only works as a USB HID device, but it also has a direct UART cable connection to the system controller on the motherboard. By pressing the Circle key, you can interact directly with the system controller, bypassing the main SoC. To give you visual feedback for this interaction, we added a tiny 128x32 pixel OLED on top of the keyboard. From here, you can check charger and battery cell status/health without any operating system support on the main SoC (even while you're still installing an OS). The keyboard OLED and direct interaction mechanism has more potential future uses, like a password manager/wallet or notification display.

We arrived at a trackball design with 5 buttons and a tiny Pixart PAT9125EL surface tracking sensor that works well for daily use. The top left and right buttons are what you expect: left and right mouse buttons. The bottom center is the middle button, and the bottom left and right each function as a modifier that turns the trackball into a scroll wheel. Alternatively, you can put your own custom functions on these buttons. The ball is the same POM sphere used in Reform version 1.

Sources for the trackball are here:

The display used in Reform is a 12.5 inch IPS eDP (embedded DisplayPort) panel from Innolux, model number N125HCE-GN1, with 24 bit color and 1920x1080 pixels. It is sharp, bright and a pleasure to do text work on. It has a great color gamut for watching movies, as well. We ordered custom 30 pin I-PEX cables to connect it to the motherboard's eDP 2mm DuPont header. Brightness is controlled directly by a PWM output pin of i.MX8M and works with standard Linux backlight drivers/tools.

We employ two 1W mobile speakers by PUI Audio (AS01808AO-3-R). These are mounted directly below the display.

We are now in the process of finalizing the options that will be available in the Crowd Supply campaign as well as their pricing. Here is a rough draft of potential options: 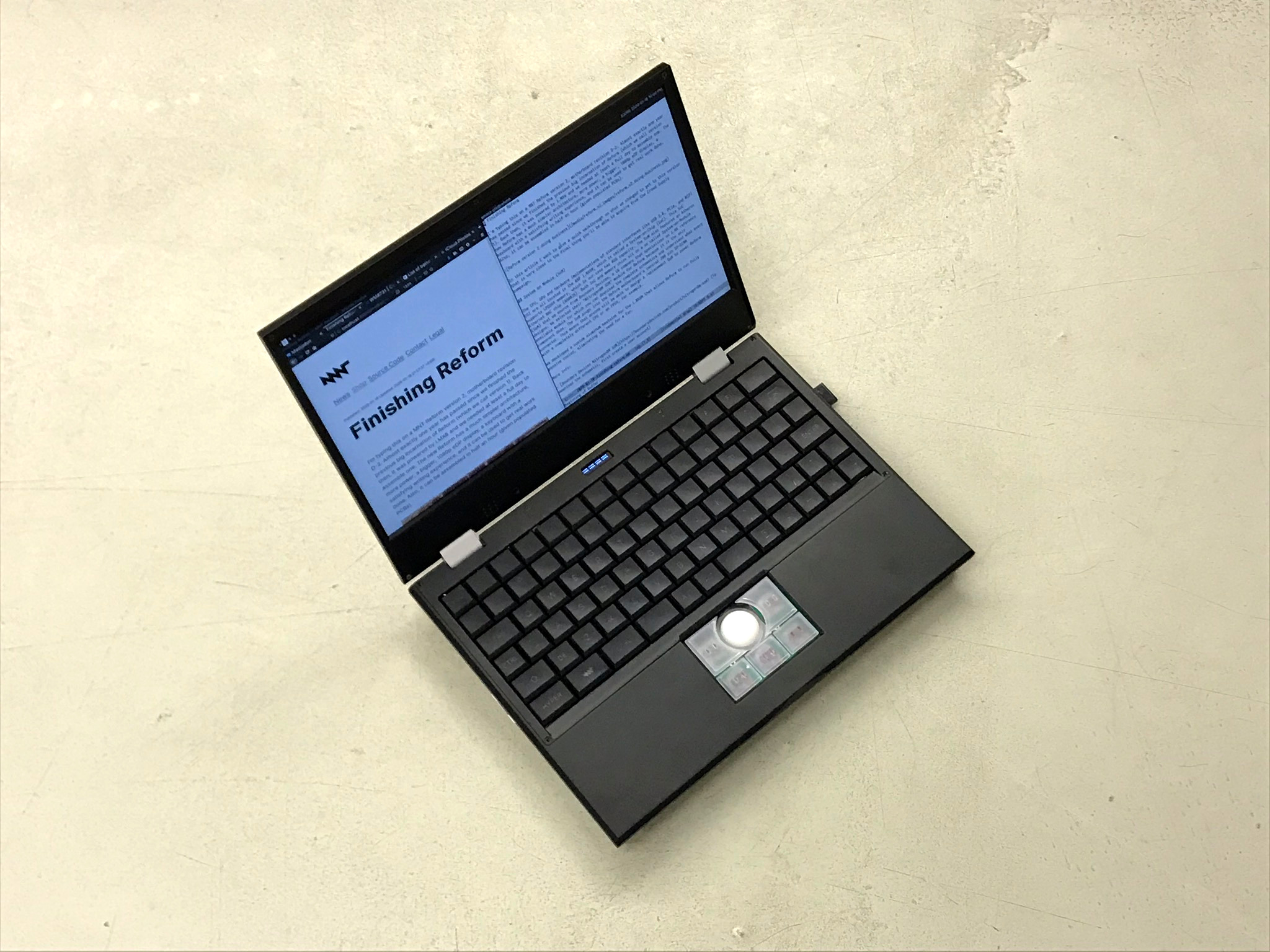 In early 2020, we pre-sold a small number of Reform version 2 beta devices to early adopters to test our supply chain, assembly process and to get some valuable last-minute feedback before shipping the final revision to Crowd Supply backers.

In parallel, we are finishing the texts, imagery and video for the campaign along with nailing down the options and pricing, with the goal of launching the campaign in February 2020.

To get notified about the campaign launch, you can subscribe with your email at https://www.crowdsupply.com/mnt/reform

Thank you for your ongoing support, ideas and encouragement over the last 2.5 years. We are excitedly looking forward to ship a much more personal computer to you soon.

Your feedback is always welcome at lukas@mntre.com, Mastodon, Twitter or #reform on irc.freenode.net.