A few days before Christmas 2018, we assembled the last one of the Reform Beta units. 13 Reform laptops exist in total; 10 went out to the adventurous people who pre-ordered them, two are for ourselves and one went to Crowd Supply in Portland as the demo unit for the upcoming campaign.

Here are some pictures of one of the final Reform beta devices: 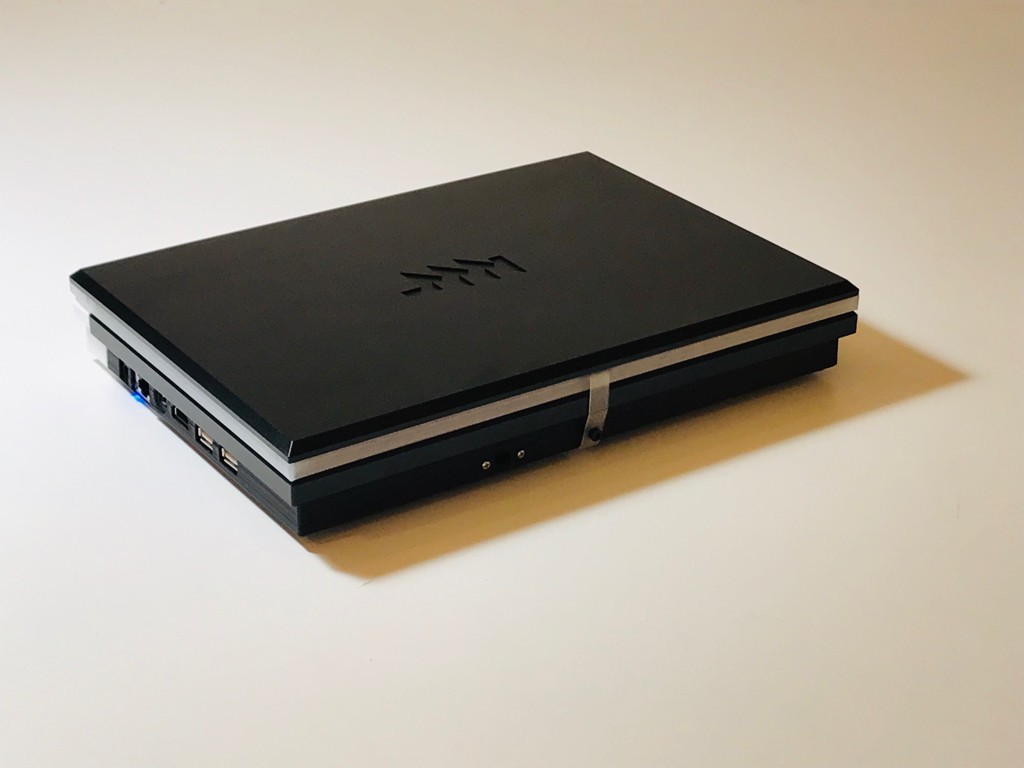 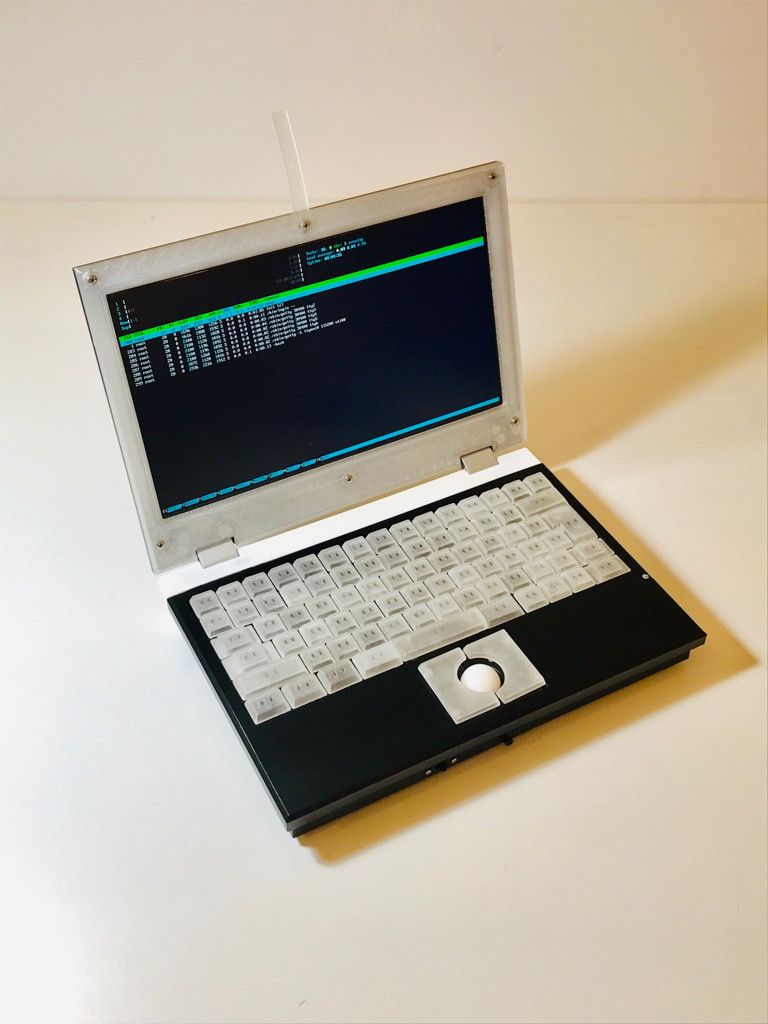 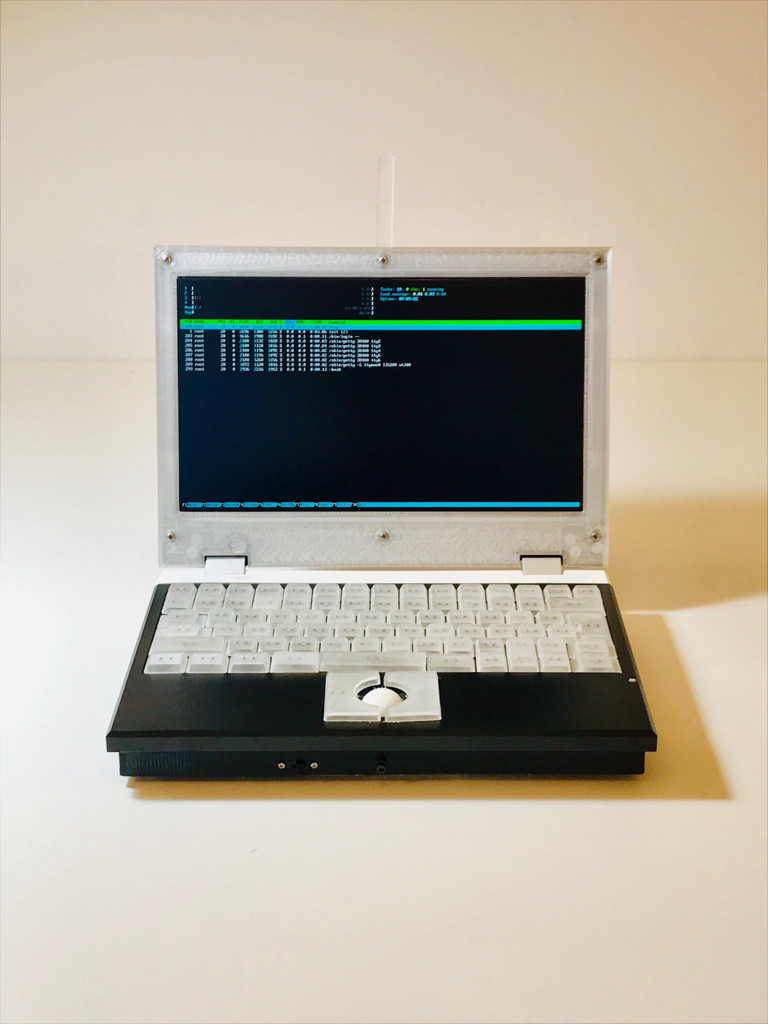 We shot some video material during the assembly process and I edited it into a clip showing many of the steps of building a Reform:

You can look at some more detail photos taken during the assembly process here:

The feedback from early customers was generally positive, and we collected a lot of homework for the next version(s): 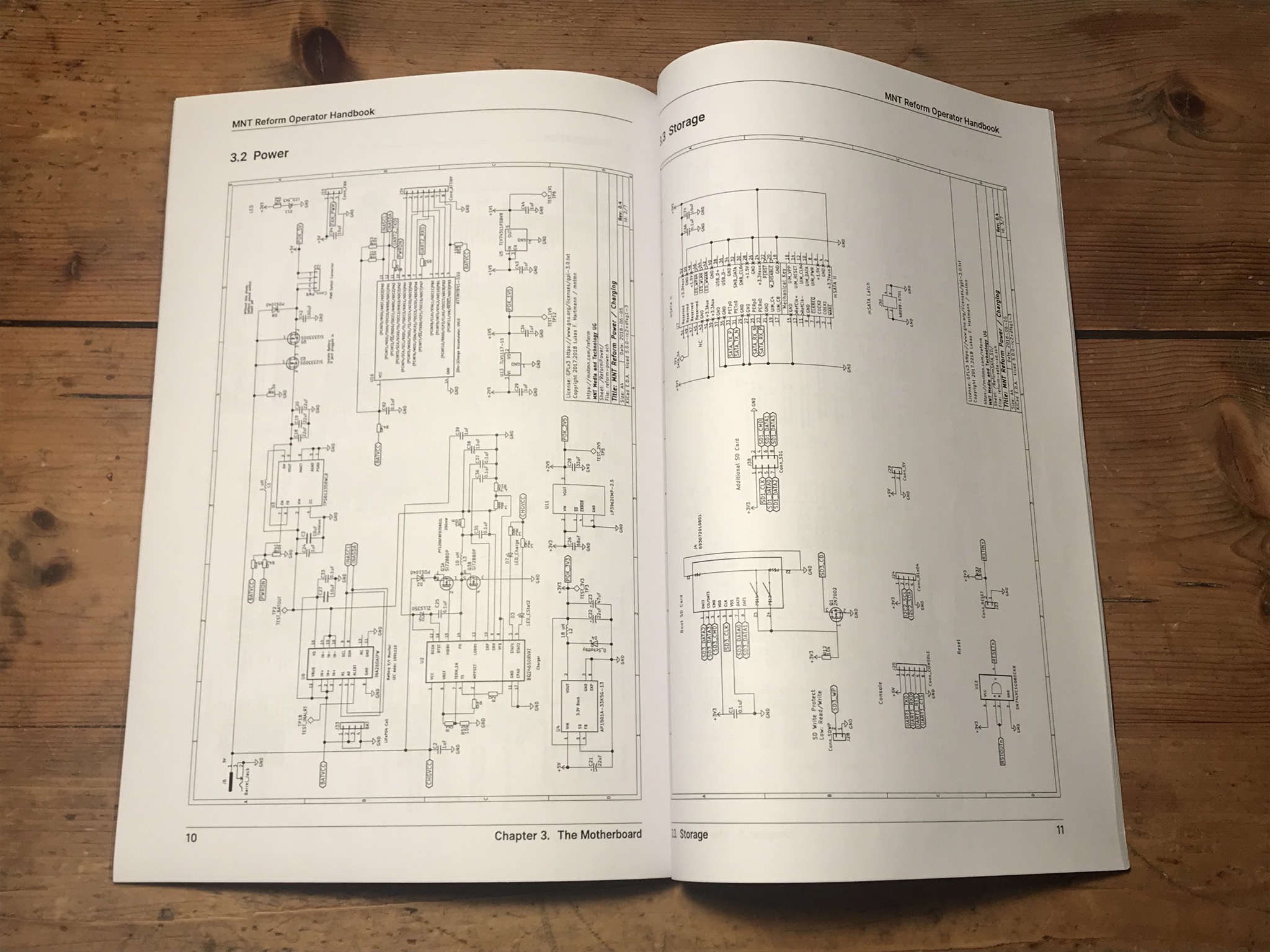 The printed, large format user manual has been a success, even if it's only a 30-page preview of its final intended form. People got real value out of the low level boot process instructions and the schematics, especially when discussing the system with other people who are interested in electronics. The manual conveys the attitude of the project well: you own the computer and have the right to know how it works.

I wrote the handbook in reStructuredText (rST) format and converted it to HTML and PDF formats using Sphinx.

The online version of the handbook is here: https://mntmn.com/reform/handbook

Some people were puzzled at first when meeting the unusual closing mechanism of the case, which is very simple and low-tech: a rubber band with a hole that you can connect to a hex screw head to hold the two case halves closed together. But the mechanism proved itself well, is cheap and easy to service.

The magnetic sensor circuit was well intended, but turned out to be unreliable. It didn't work on low battery power. I deactivated the feature before shipping and replaced it on my own device with a much more reliable physical switch.

Also, there has been a regression in a recent Linux kernel (exact version unknown) that forces you to use the noconsolesuspend boot parameter, or the device will not wake up from sleep. This results in Reform consuming around 2.5W power when asleep, which could be much less. We'll do a git bisect to find the issue later.

The typing experience of the slim mechanical keyboard was well received, but people were wishing for a higher number of keys, to have dedicated keys for PgUp/PgDown, and to have the cursor keys in a more standard position. The split spacebar is a successful design. On the negative side: the readability of the laser engraving is bad and I almost feel like apologizing for this design decision. While it can be cool for people who are touch typing (like me), it makes typing hard for people who need to regularly read keycaps. The next version of the keycaps will have UV printed symbols or similar.

Some people were pleasantly surprised about how well the trackball works, for others it had some stiffness issues at first that could be solved by poking/prying the top ring a bit. I consider the trackball a success but want to improve the button layout and add a third button, and an easier way of using the ball for scrolling. And I want to offer a trackpad as an alternative for people who prefer these; trackpads are also cheaper than the complex mechanical/optical parts needed for the ball. 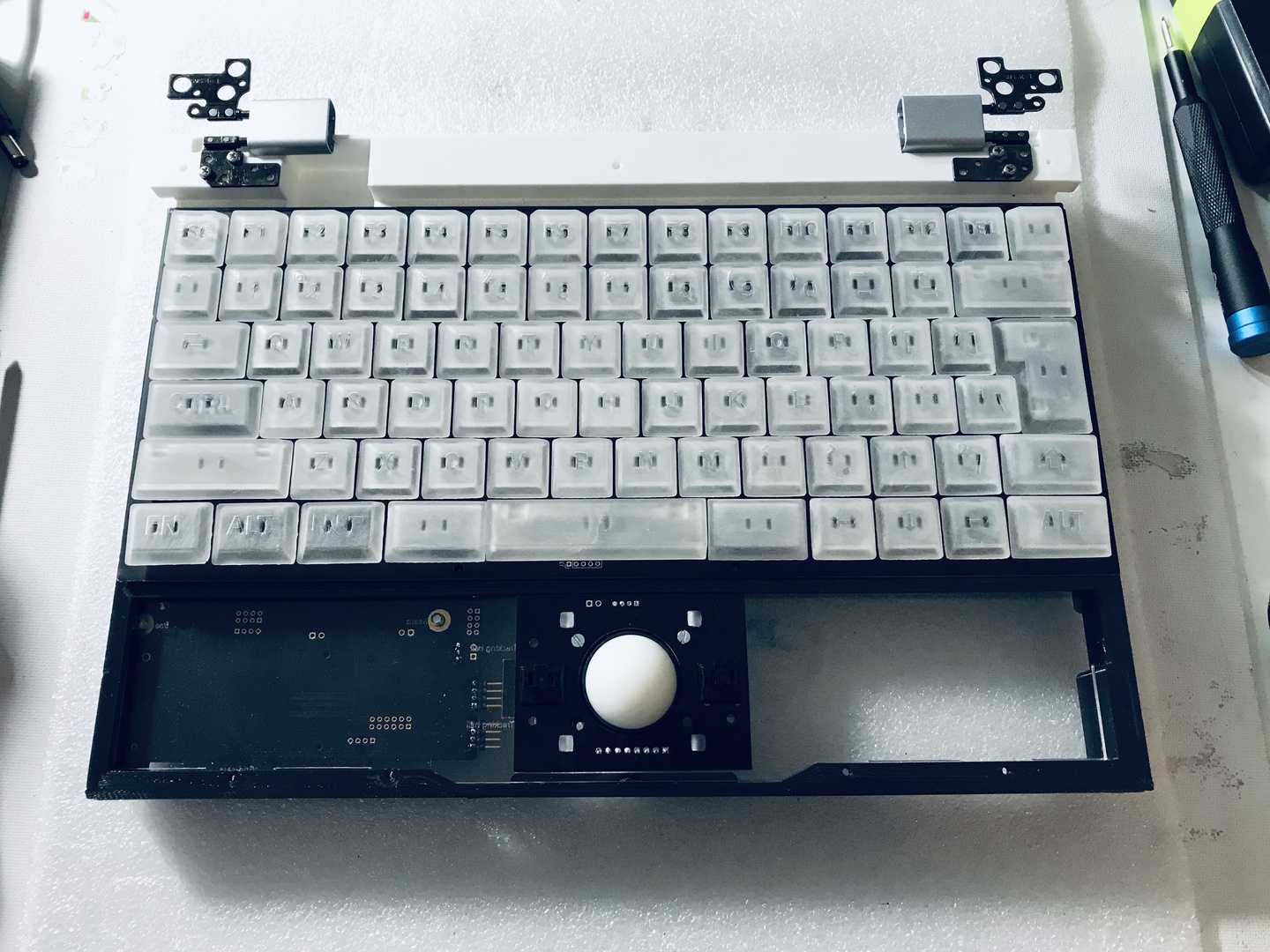 Many people asked to pick up a Reform to feel its weight, and nobody seemed to find it overly heavy. It still comes across as bulky, but hey -- you get a mechanical keyboard, full-size ethernet port and space for your customizations in return. Making the device much slimmer is not a priority for now.

While I got much better at putting together Reforms near the middle-end of the process, the design revealed itself as overly complex in some parts. This is the result of changing the materials strategy multiple times over the last months when it became apparent that the PU molding process would not work out (bubbles, messy, etc.). While we managed to switch to an aluminum CNC design for 2 of the body parts in record time (thanks to Jonas at Neuform!), we didn't have the time to thoroughly rethink the complete mechanical assembly, interaction and screws. For the next version, we will use an updated design (which Ana is working on) with fewer parts and more CNC milling. Of course, all 3D files will also be made available in a version suitable for 3D printing as well.

Reform Beta has only one LiFePO4 battery cell. People are excited about the use of this safer and more durable battery technology, but there is some system instability when the cell is discharged to lower voltages. I chose this design mainly to keep it simple and avoid a charge balancing mechanism. For the next version I'd like to include at least 2 cells to have a higher base voltage, and to take another look at supporting standard cell formats that might be easier to replace for customers.

I'm still happy with the display, but some people asked for higher screen resolutions (at least 1080p). While I want to make that possible, it will only be in combination with a future CPU/motherboard upgrade. The current resolution (1366x768) is the maximum we can get out of the single channel LVDS and is easy on the memory bandwidth and eyes (real pixels!). It also doesn't cause any problems with older, non-HiDPI software. 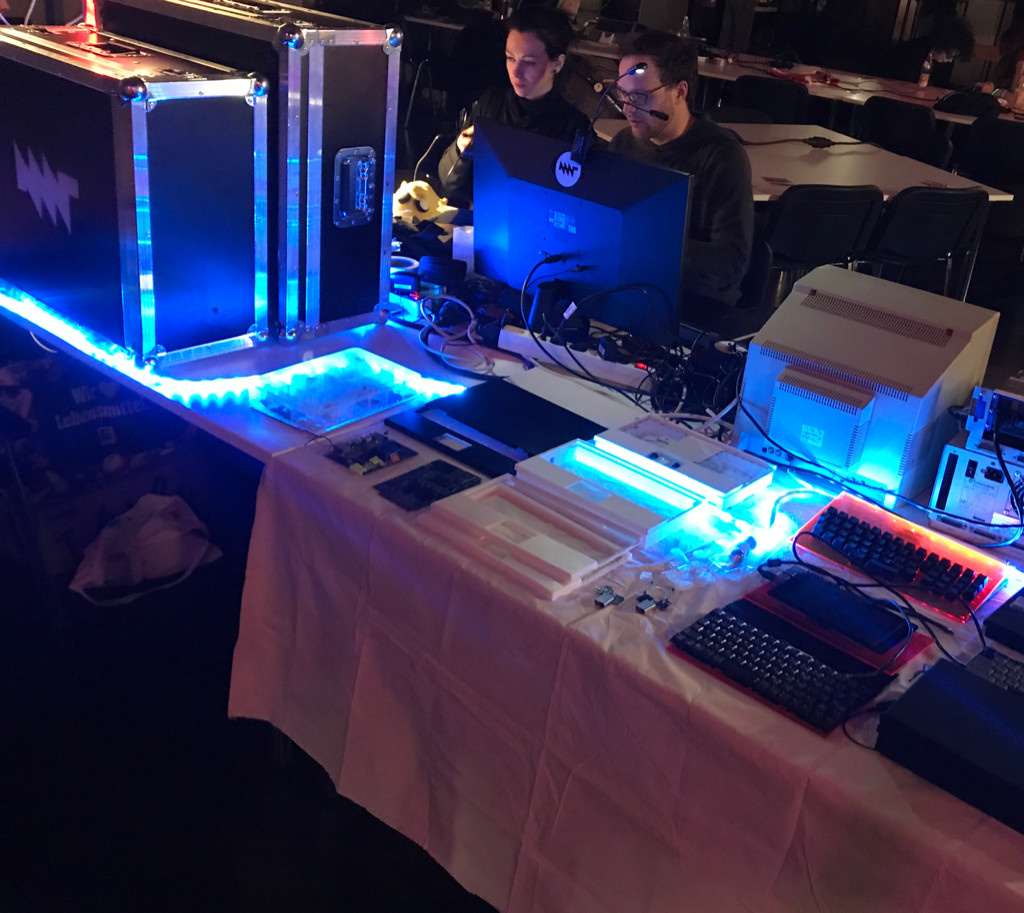 After Christmas, we took the Reform prototypes, some tools and vintage Amigas to the 35th Chaos Communication Congress in Leipzig. We were provided with table space by the Critical Decentralization Cluster (thanks for having us!) and answered many questions to visitors who showed up non-stop.

Greta, who was also responsible for the SMD assembly and who designed and hand-made all Reform sleeves, tailored really nice custom overalls for us. People were asking "so what are you reforming?" 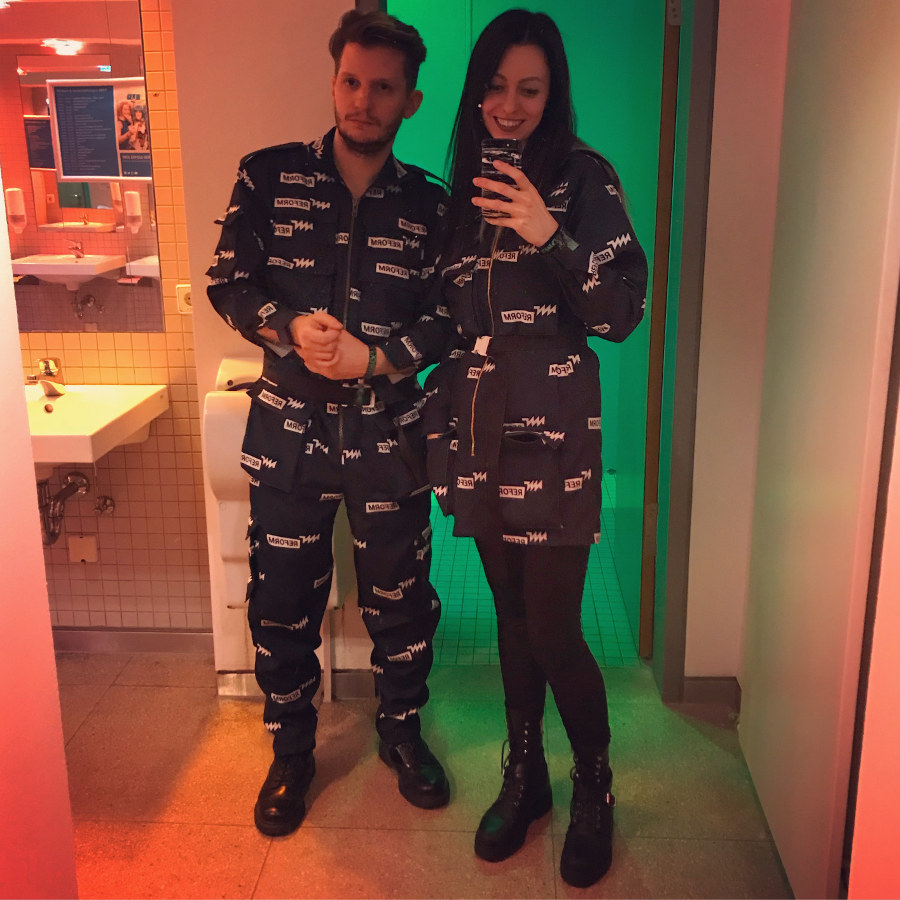 We had more visitors at our assembly than I expected, so I spent most of my time at the congress answering questions and explaining Reform, its parts and prototypes. Many people were excited or intrigued, some skeptical (preferring to hack their ThinkPads with coreboot et al. instead). Interestingly, the feedback of people who had not yet used a Reform was somewhat different from that of the actual users.

The main theme is performance vs openness. Some people are concerned that their heavy workloads would not be a good match for the the aging i.MX6QP chip and suggested an upgrade to i.MX8M or others like Rockchip RK3399 etc. My main reason for sticking with i.MX6QP in this version is that it still offers the best combination of documentation, blob-free mainline Linux and performance that you can currently get. i.MX8M, while offering slightly more performance, currently needs some binary blobs to bring up DDR and HDMI, is not actually fully supported in mainline Linux yet and the etnaviv libre 3D GPU drivers for its Vivante GC7000 are still in heavy development. ARM SoCs with Mali GPUs don't have usable open-source GPU drivers yet, and affordable, fast RISC-V chips are not available yet, even if that would be really great.

By using i.MX6QP, we can have a working, libre system today. In the footsteps of Novena, we've shipped an open mechanical, electrical, hardware and software laptop that you can use to get real work done, but more importantly: a conversation piece and a base to build upon. When the open chips arrive, we'll be ready for them.

We're now working on implementing all relevant changes from the feedback and dogfooding (using the devices ourselves):

At the same time, we're moving MNT from our apartment into a real studio space starting January 15th, which will help us handle the campaign and future products much better after the initial delay of moving.

If you want to stay up to date on the crowdfunding campaign, you can sign up here:

If you have resources to support us, be it with electronics/manufacturing know-how, sponsorship, partnerships or anything else, feel free to contact me at: lukas@mntmn.com

Also, we're always happy about visitors in the IRC channel #mnt-reform on irc.libera.chat.

PS: Eat Your Own Dogfood

I wrote this article in markdown format on my Reform in Emacs with a customized olivetti-mode for distraction-free writing, on an external HDMI monitor with 1080p resolution for improved ergonomics. The operating system is Debian GNU/Linux.

I'm using X11, the i3 tiling window manager with the Tint2 task bar. I've found the best terminal to be xfce4-terminal. I've settled on PCManFM as my file manager and use Firefox, qutebrowser and Gnome Web as browsers.

I watch videos with VLC, gstreamer or mplayer.

For dealing with business documents, I use LibreOffice and Gnumeric. For music/sound editing I'd recommend SoX and LMMS; for gaming fun there are excellent emulators like PCSX_rearmed (PlayStation with ARM JIT), VICE (Commodore 8-bit) and open source games/engines like Minetest, ScummVM, OpenRA (Command&Conquer) or ioquake3.

OpenSCAD works well to whip up STL models for 3D printing while I use FreeCAD to inspect STEP models that Ana exports from SolidWorks. Meshlab is an excellent tool to work with mesh objects like STL or OBJ.

Unfortunately my favorite electronics CAD tool KiCAD does not yet run with acceleration on OpenGL ES 2, but I'm working on a proof of concept patch to address this issue.

All in all, even in this early stage I enjoy working with and on Reform as my main computer, and I'm looking forward to improve it together with you and get the Crowd Supply campaign rolling!