My deadly disease was just a bug 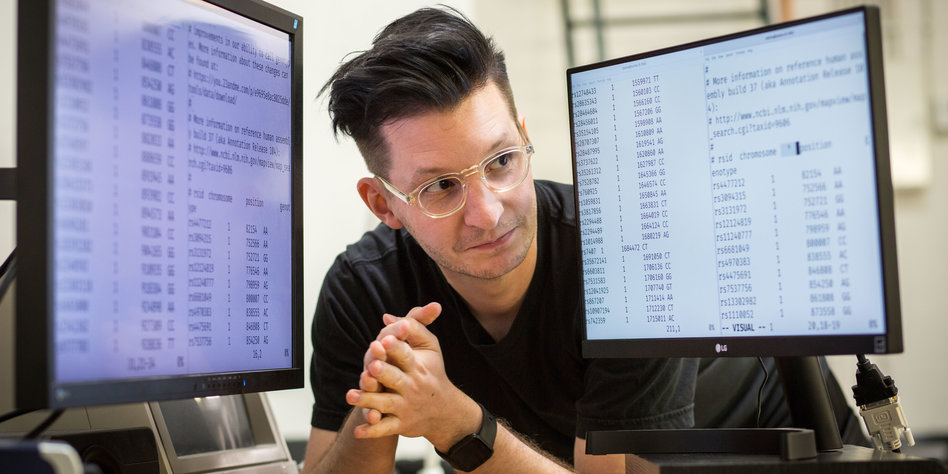 This is my official translation of the story I originally posted over at @mspro's blog ctrl+verlust and which received widespread attention in the German media.

In the wake of the FDA's warning letter to 23andme, I thought that my story might be of value for an English speaking audience and decided to publish this file that I had lying around on my computer for several weeks.

Note that I am very much aware of the fact that 23andme doesn't claim to make any diagnoses. My story serves to illustrate the psychological effects that a health report can nevertheless have, ultimately driving me to spend some nights trying to disprove the report in question.

I signed up for 23andme in November 2010. I sent them my saliva and received a web login to my genome in return. Or at least that's what I thought back then. Today I'm a bit more informed and know that what 23andme really does is this: they extract some sort of gene soup from my saliva and pour it on a so called DNA microarray chip made by a company called Illumina. These chips are covered with thousands of little testing probes. A probe is made up of a lump of molecules to which the matching pieces of my DNA naturally attach. These molecules are designed in a clever way, so that they light up when a match occurs. Hundreds of thousands of chemical tests run in parallel on the chip. The result is an image that is scanned by a computer and compared to a database of so called SNPs: “snips”. According to Wikipedia, these “single nucleotide polymorphisms” make up about 90 percent of all genetic variation in the human genome.

So when 23andme detects a SNP variation in my genome it means that in a base pair of my DNA there's a difference from the so called “reference genome”. We may recall: the nuclein bases Adenine (A), Guanine (G), Cytosine (C) and Thymine (T) are the basic building blocks of DNA code. Say I had an A>C SNP: this would mean that I had Adenosine instead of Cytosine at the corresponding DNA location. This difference doesn't necessarily have to be bad. The actual judgement is derived from statistics, for example: do all the members of a certain group of people who have the same mutation develop the same kind of symptom?

To sum it up, 23andme compares hundreds of thousands of scanned SNPs to their database which they constantly update in response to new scientific studies and sources. Their website then shows you nicely designed, ready to ingest interpretations of your genetic variations manifesting in health risks. But you also learn about more entertaining topics like heritage (99% European, 3% Neanderthal, .5% Scandinavian). Everytime they have new updates for “Health Risks” or “Inherited Conditions”, you'll receive an email.

Everything went well for a long time. There were no special surprises. I will probably die from a mix of heart attack and prostate cancer; nothing special there.

But some weeks ago there was, suddenly, an unnerving update in my inherited conditions report. I clicked the link and a warning appeared: you have to specifically agree if you want to know the result of potentially unnerving, life changing results. I clicked OK and was forwarded to the result. It said:

I let that sink in for a moment. I had never heard of this illness before.

“Some people with limb-girdle muscular dystrophy lose the ability to walk and suffer from serious disability”, said the page, showing me an image of a smiling physical therapist treating a smiling patient. What 23andme didn't spell out – but Wikipedia – was that LGMD potentially ends with death. The more I read about LGMD the worse my mood grew. I fumbled with my shoulders and thighs and didn't notice any special degradation. I thought, and I wanted: “This can't be true. It must be an error.”

It also appeared to me that I had absolutely no idea what the “technical information” behind the fine printed link on the 23andme result page meant.

When someone is confronted with a life threatening situation, they can develop unexpected capabilities. When a nerd is confronted with a life threatening situation, they read every last site on the web until they completely understand every last bit of the circumstance. I downloaded my 23andme raw data and poked at it with a text editor. I read cryptic articles about genetic engineering and installed the weird genome analysis tool “Promethease”, which can import, amongst other formats, 23andme raw data; but in contrast to 23andme it tells you even the very unnerving stuff. I tried to understand enough of genetic engineering to understand the source code of my own body. Someone had found a bug in me and I tried to reproduce it.

Technically speaking, 23andme detected two SNP variations in my genome called rs28933693 and rs28937900. So I attempted finding out more about these mutations. When you look up “rs28933693” in SNPedia, a kind of Wikipedia for SNPs, you'll find a link to an entry in OMIM (Online Mendelian Inheritance in Man). The entry features medical study excerpts concerning some LGMD patients that all had the same so called homozygous mutation in a certain gene location.

To understand the meaning of this you have to recall that humans are diploid organisms: they have two copies of each chromosome, one inherited from the mother, another from the father. A heterozygous mutation only affects one of the two copies, a homozygous mutation means that the same location of both copies differs in the same way.

Diploidy is a good thing: it means that I potentially have a backup of every critical function of my body. So if a piece of my DNA encodes a critical enzyme and this code is “broken” on one of the chromosome copies, it could well be intact on the other. If you're out of luck and both of your parents are “carriers” of exactly the same mutation, the inherited condition may manifest in you. This was the case with the LGMD patients mentioned in the study I stumbled upon. Both of their copies of the respective chromosome region are mutated in the same (homozygous) way, which triggers the muscular dystrophy. This very rarely happens, but it happens.

So now I should be one of those very few?

After researching tensely for some hours, trying to ingest as much knowledge as I could, I looked closer - into the raw data that 23andme provided as a download. Yes, I really had two mutations. But they weren't on the same gene, but on two different genes. By rare chance, both of these mutations are statistically linked to LGMD, but to two different versions of LGMD. So I didn't have a homozygous mutation, but two unrelated heterozygous ones. The web programmer at 23andme had added those two mutations together into one homozygous one in their code. And so the algorithm switched to red alert.

I sent a support request to 23andme including my research and conclusions (this would be called a “bug report” in software engineering). After a few days of waiting, 23andme confirmed the bug and apologized. So the bug was not inside of me, but in the algorithm. An algorithm can be fixed easily, unlike my genetic code.

I can live with that. For quite some time, I hope.